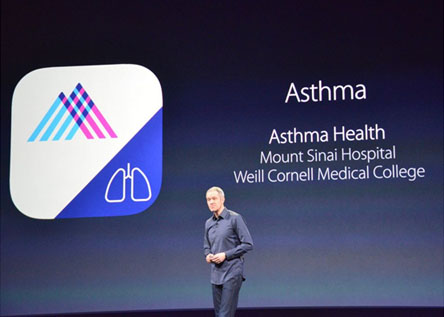 Health data collected entirely from smartphones can be reliable, research from Mount Sinai Hospital claims. The researchers involved found that Apple’s Research Kit platform and an app for asthma were fairly accurate when compared to existing patient studies.

Finding and recruiting participants is a big hurdle for medical studies. In recent years, people have started collecting health data from smartphones, which seems sensible given how common smartphones are. But this raises questions about whether data gathered this way can be trusted. Today’s study, published today in the journal Nature Biotechnology, suggests that health care apps may be reliable, at least in regards to asthma. This is good news since smartphone usage is only increasing — there are supposed to be 6 billion smartphones used worldwide by 2020 — and collecting reliable health data from them could be very good for research.

Apple launched Research Kit, a software medical platform, in 2015. It helps researchers recruit participants for studies; participants can enroll in trials and take surveys or provide other data. Early research partners included big names like the University of Oxford, Stanford Medicine, and the Dana-Farber Cancer Institute. The asthma mobile app from today’s study was one of the five disease-specific apps that Apple launched with the initial release of Research Kit.

In a current study, nearly 50,000 iPhone users downloaded the asthma app. Of these, about 7,600 people enrolled in the six-month study after completing the consent form. People in the study took surveys on how they treated their asthma; the app also provided information about location and air quality. The scientists then looked at how this patient-reported data measured up when compared to external factors. For example, around the time there were fires in Washington state, patients in the area reported worse asthma symptoms, as might be expected, suggesting the data was fairly reliable. They were similarly able to correlate data related to heat and pollen