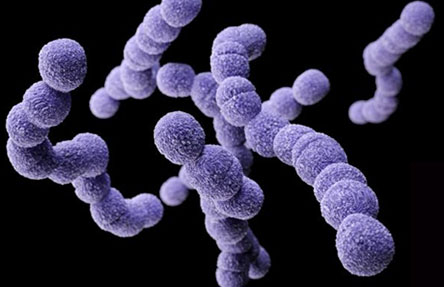 GBS is usually passed from mother to baby around birth, but can also be passed on in other ways. In England and Wales there are around 450 cases of GBS infection in babies every year (about 1 in 2000 babies under 3 months old).
1 in 10 babies infected with GBS will die. Half of the babies who developed GBS meningitis will be left with some level of long-term disability such as cerebral palsy, deafness, blindness or learning difficulties. Overall, 1 in 17,000 babies in the UK die from GBS infection each year.

How do babies get Group B strep?

Like many bacteria, GBS is often present in people’s bodies without showing any symptoms. Up to 3 in every 10 adults carry the bacteria harmlessly in their digestive systems as part of the normal gut ‘flora’. In women, GBS is also commonly found in the vagina.
If a woman is carrying GBS at the time her baby is born, there is a 1 in 2 chance that the baby will also carry the bacteria on his/her skin. Most of these babies do not get sick, but about 2-3 out of every 100 who have the bacteria living on their skin may develop a serious infection such as pneumonia, meningitis or septicaemia (blood poisoning).
In babies, there are two types of GBS infection: early-onset (in babies up to a week old) and late-onset (in babies from one week to three months old). Early-onset GBS is caught from the mother during birth. Babies probably develop late-onset GBS through skin-to-skin contact with someone carrying the bacteria.

What are the symptoms?

About 2 out of every 3 cases of GBS are early onset. Most babies who become infected develop symptoms within 12-24 hours of birth. These include:
⦁ being floppy and unresponsive
⦁ not feeding well
⦁ grunting
⦁ high or low temperature
⦁ fast or slow heart rates
⦁ fast or slow breathing rates
⦁ irritability
Symptoms are similar for late-onset GBS infection.

How is GBS infection treated in the UK at the moment?

Because of the high risks of GBS, newborn babies with suspected GBS infection are usually started on antibiotics given into a vein immediately. Tests are then done to see if the baby actually has GBS. This may involve a blood test or a lumbar puncture (taking a sample of fluid from around the baby’s spinal cord). Antibiotic treatment will stop if the tests are negative, or if there are no more signs of GBS after 24 hours. If the tests are positive, antibiotic treatment will continue for several days (usually 7-10 days).

Can we prevent GBS infection?

If a woman is known to be carrying GBS she can be given antibiotics through a drip when she is in labour to reduce the risk of early-onset GBS. However, this makes no difference to the number of cases of late-onset GBS. Antibiotics are not given before labour starts because GBS tends to come back after the course is finished, so there would still be a risk of passing an infection on to the baby.
In some countries, all pregnant women are screened late in pregnancy to see if they are carrying GBS. At the moment, there is no routine GBS screening in the UK. This is because:
⦁ Only a small number of babies will develop GBS infection after birth. It is not possible to tell from screening which babies will get the disease.
⦁ As up to 3 in 10 women carry GBS, routine screening could mean that a very high number of pregnant women would be given high-dose antibiotics that they do not need.
⦁ Many babies who are severely affected by GBS are born prematurely, before routine screening would be offered.
At present there is no licensed (approved for use) vaccine to prevent GBS.

Why is a vaccine being developed for GBS?

There are a number of problems with giving antibiotics to women in labour:
⦁ There is a risk of severe allergic reactions to the antibiotics
⦁ Over-use of antibiotics can lead to strains of bacteria that are resistant to antibiotics
⦁ Research suggests that exposing babies to antibiotics very early in their lives may have other effects.
There are also other problems with routine screening for GBS, apart from the ones listed above:
⦁ If women who are carriers of GBS don’t attend appointments, they will not be picked up by screening.
⦁ A test done earlier in pregnancy may not give a reliable indication of whether the mother is a GBS carrier at the time the baby is born.
If pregnant women could be given a vaccine against GBS, this could potentially prevent most cases of GBS without the need for antibiotics or screening.
Currently a number of GBS vaccines are being developed throughout the world. They have been tested in animals, and in phase I and II trials in adults. Some new vaccines have also been tested in pregnant women, and these have not been found to cause any problems during pregnancy.


Break Through In Bio

Bio Frontiers is a unique endeavor to chisel and shape contemporary outlooks in Biology. It is a monthly magazine dedicated to bringing the evolving facets of Biology to its wide gamut of readers.We focus on helping our readers to gain better understanding of the fundamental concepts in Biology and develop on that.